April 15, 2018
In this video we will exploit a MS17-010 vulnerable computer, but instead of using the classic "reverse_tcp" payload, we will use the "reverse_https" payload. 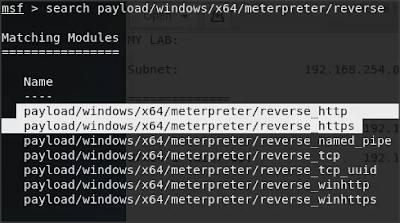 There are two main features which make the reverse_http and reverse_https payloads very useful:

1. These payloads are using http/https types of traffic and protocol inspecting firewalls usually allow http/https traffic while they might block other types of traffic. In addition, these payloads use the WinInet API and will leverage any proxy or authentication settings that the user has configured for Internet access.
2. These payloads deal well with cases when the compromised target has spotty Internet access. If the connection between "victim" and the "attacker" machine drops, then the payload will keep trying reconnecting back to the "attacker" computer.

The majority of the commands used in this video should be familiar from my previous videos. I'll just mention a few more details in regards to a few commands:
a) When configuring the multi handler module; exploit -j -z will run the exploit as a job (-j option) and will prevent session interaction after successful exploitation (-z option)
b) When configuring the multi handler module; set exitonsession false will keep the exploit running after a session was established (In this way multiple sessions can be established with a single multi handler exploit)
c) The detach command will detach a Meterpreter session, if the session was established via reverse_http or reverse_https payloads. This command cannot be used if reverse_tcp payload was used.

There are a number of advanced payload settings that control various timings for "reverse_http" and "reverse_https", as it can be seen in the picture below:

By default, a session will be forcibly shut down after one week (604800 seconds). If you want to keep a session indefinitely, then set the SessionExpirationTimeout advanced setting to 0 (zero).
Also, by default, an orphaned session (no activity) will be killed after 5 minutes (300 seconds). To change this behavior and keep the session indefinitely, then set the SessionCommunicationTimeout advanced setting to 0 (zero).