March 18, 2018
I thought that it would be useful, for some readers, if we review some of the most commonly used post-exploitation commands in Meterpreter and Metasploit.
This is the second video and we will discuss about stealing hashes and passwords, using keyloggers, accessing webcams and invoking other post-exploitation modules.

The first part of this tutorial can be found here:
Quick Meterpreter and Metasploit tutorial - Core, System, Networking and File System usual commands


The Windows 7 test machine is affected by the MS17-010 vulnerability. For exploitation, we will follow the steps detailed in the previous post:
MS17-010 Vulnerability - Using EternalBlue exploit module in Metasploit

This command will dump the contents of the local SAM database, allowing us to get the local user IDs and the password hashes.

Note:
The "hashdump" command could trip the antivirus on the target computer and for that reason, it is usually better to use the "smart_hashdump" module instead.

"smart_hashdump" is a post-exploitation module which gets the local user IDs and the password hashes from the target computer. It also gets the password hints and it saves all the information to a text file on the Kali local computer.

After we get the hashes, we can try to crack them on an Internet hash cracker website, like Hashkiller or Crackstation

The hashes are in LM:NTLM format. The LM format is usually easier to crack, but depending on how the target computer is configured and how long the password is, the LM hash might not be actually generated and used.

The passwords used in my lab are short and simple and as you can see below, the NTLM hash was quickly cracked on the two websites mentioned before:

The "load mimikatz" command by itself will not get any hashes or passwords. Instead, loading the "mimikatz" module, will allow running additional commands which can extract hashes, passwords, keys, pin codes and tickets from the memory used by the lsass process.

Check the extra commands that can be run after loading the "mimikatz" module:

This command will attempt to retrieve the wdigest credentials.

Note:
Some of the credentials revealed by the "mimikatz" commands will be in clear text. Because the credentials are grabbed from the lsass process memory; in order for a user password to be revealed in clear text, that user ID should have previously logged into the target computer.
In my lab, I successively logged into the target computer using both local and domain user IDs and therefore commands like "wdigest"or "kerberos" were able to reveal all passwords in clear text. 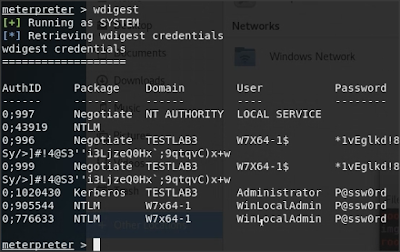 This command will attempt to retrieve the kerberos credentials. 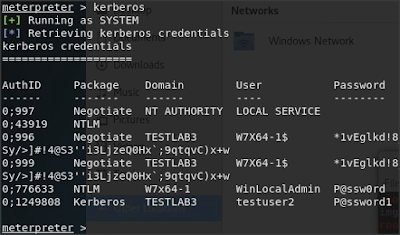 This command will attempt to retrieve the msv credentials (hashes).

This is an example of a custom mimikatz command that can be invoked.
sekurlsa interacts with the lsass Windows process running on the target computer and searches for user credentials in its memory.

This command will display the time duration for which the remote user on the target computer has been idle.

This command will grab a screenshot of the desktop on the target computer.
The screenshot will be saved to a file on the local Kali computer.

The "uictl" command will enable and disable the keyboard and/or mouse on the target computer.

This command will start the keylogger on the target computer.

This command will dump the keylogger buffer on the attacker's computer screen.

This command will stop the keylogger on the target computer.

This command will list the webcams available on the target computer.

This command will take a snapshot from the target computer webcam. The snapshot is saved to a file on the local Kali computer.

This command will play a video stream from the target computer webcam.

The “arp_scanner” module will perform an ARP scan for a given IP address range, through the remote target computer.
Using this command we will discover hosts hidden behind the firewall, which are accessible via the compromised target computer.

The “checkvm” module, verifies if the target computer is a virtual machine.

The “credential_collector” module gets password hashes and tokens from the target computer.

The “dumplinks” module parses the .lnk files located in "Recent Documents".
This information could be very useful for further information gathering, because we can find out important data by checking the recently accessed files.

Note:
If this command doesn't work as expected, then migrate the Meterpreter server to a different process by using the following command:
run post/windows/manage/migrate

The “enum_applications” module enumerates the applications that are installed on the target computer.

The “enum_logged_on_users” module lists the current and recently logged on users together with their SIDs and profile path. 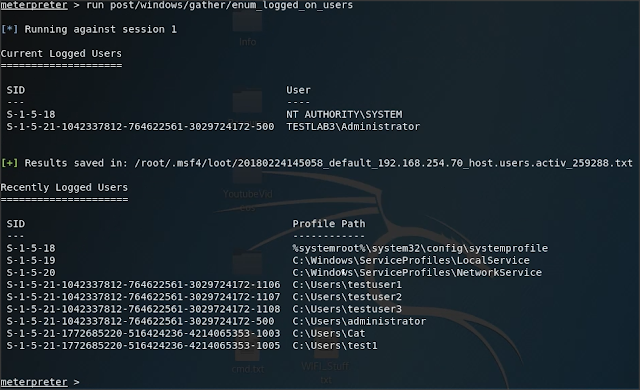 The “enum_shares” module lists the configured and recently used shares on the target computer.

The “local_exploit_suggester” module scans  for local vulnerabilities which are exploitable with Metasploit. It then makes suggestions based on the results, as well as displays exploit’s location.